IGI is so proud to announce that Torie Stotz will be joining the University of Illinois Gymnastics Team!

From the Illinois Press Release:

“Tori was actually one of the first recruits I met when I arrived on campus last year in July,” said Walsh. “I immediately recognized her as having a very positive attitude and contagious personality. She is a solid vaulter, has a strong work ethic, and a lot of potential to contribute to the program on any event.”

For the Saturday IGI Leo Spirit Day, we have some cute, new IGI leos in our pro shop featuring a fun, multicolored back and colorful jewels on a black front!

Anastasia will be attending the University of Oklahoma next season on a full gymnastics scholarship . Oklahoma is currently the #1 College program in the country and is the reigning NCAA National Champion.

). Gymnastics fans can follow the action easily and join the conversation on Twitter by using the official hashtag of the event, #NastiaCup.

Former IGI gymnast Hayley Sanzotti was just featured in an article about her experiences as a gymnast at Utah State University. Head Coach Nadalie Walsh had this to say about Hayley: “Three words sum up Hayley,” Walsh said. “She’s reliable, dependable and mature. Those are three words that just really encompass her. Her gymnastics has always been outstanding, but as far as consistency, you can put money on her that she’s going to do what needs to be done, and if she needs to, she’ll even step up and shift the atmosphere. When I say that, she’ll get the rest of the team to watch her do her beam routine and then everybody is re-engaged if we had any sort of downfall.” Congratulations Hayley!!!

Former IGI Gymnast Lexi Funk was honored as the Big Ten Freshman of the Week. Lexi, now at the University of Michigan, was named Freshman of the Week for the first time in her career. Last week she scored a 9.825 or better on all three of her events. She tied for second on floor with a season-high 9.875. Her 9.825 on bars matched a career high and her 9.825 on beam was her second-best score of the season. Lexi also scored a career high 9.925 on beam versus Maryland on February 5th. Congratulations Lexi!!!

IGI Senior gymnast, Anastasia Webb, signed a National Letter of Intent for a gymnastics scholarship to the University of Oklahoma. Oklahoma is currently the #1 NCAA program in the country and is the reigning National Champion.

OU Head Coach KJ Kindler had this to say about Anastasia:
“When you speak with Anastasia, it is impossible not to hear the joy in her voice when she discusses family, gymnastics and becoming a Sooner. Her vitality and happiness are completely contagious, but inside lurks a fierce competitor. We are captivated by her demeanor when she takes to the competition floor. There is great confidence there and I believe it was cultivated through her family and her training. We are certain Anastasia will be an all-arounder for OU right out of the gate. She had a breakout season last year making the JO National Team after several years as an Elite. She is a very powerful and quick vaulter and tumbler, and yet an extremely graceful dancer. She has great confidence and there is no doubt she will be a team leader in competitions.”

Anastasia is from Morton Grove and is an academic honor roll member at Niles West High School, she plans to major in health and exercise science at OU and wants to become a physician assistant. She was recruited by numerous schools including: LSU, Alabama, Stanford, Utah, Denver and Michigan.

Congratulations to former IGI Gymnast, Haley Scaman and the Oklahoma Sooners on winning their second NCAA National Gymnastics Championship in three years. Haley concluded her outstanding career with a 9.950 on Floor Exercise (highest FX score of the session). She also posted a 9.900 on Bars, as well as a 9.850 on Vault.

Haley Scaman: Going out a champion is phenomenal (ESPNW)

IGI has strong ties to Oklahoma Gymnastics. Former IGI gymnast Kayla Nowak was an Oklahoma gymnast (2010-2013) and is currently a member of OU’s gymnastics staff. In addition current IGI gymnast, Anastasia Webb is a 2017 commit to the University of Oklahoma. 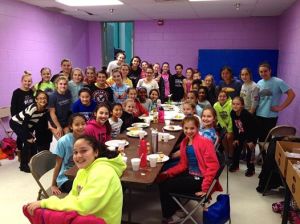 IGI’s optional team had their annual ‘Team IGI Thanksgiving Dinner’ after a good cardio practice Tuesday night! With so many kids they had to us two room! Being thankful for so many things the team wishes everyone a Happy Thanksgiving and God Bless!

IGI would like to congratulate Lexi Funk and Alison Bushman for their performances at Level 10 Nationals in Jackson, Mississippi.

Congratulations to all for a great showing!

Scroll back to top